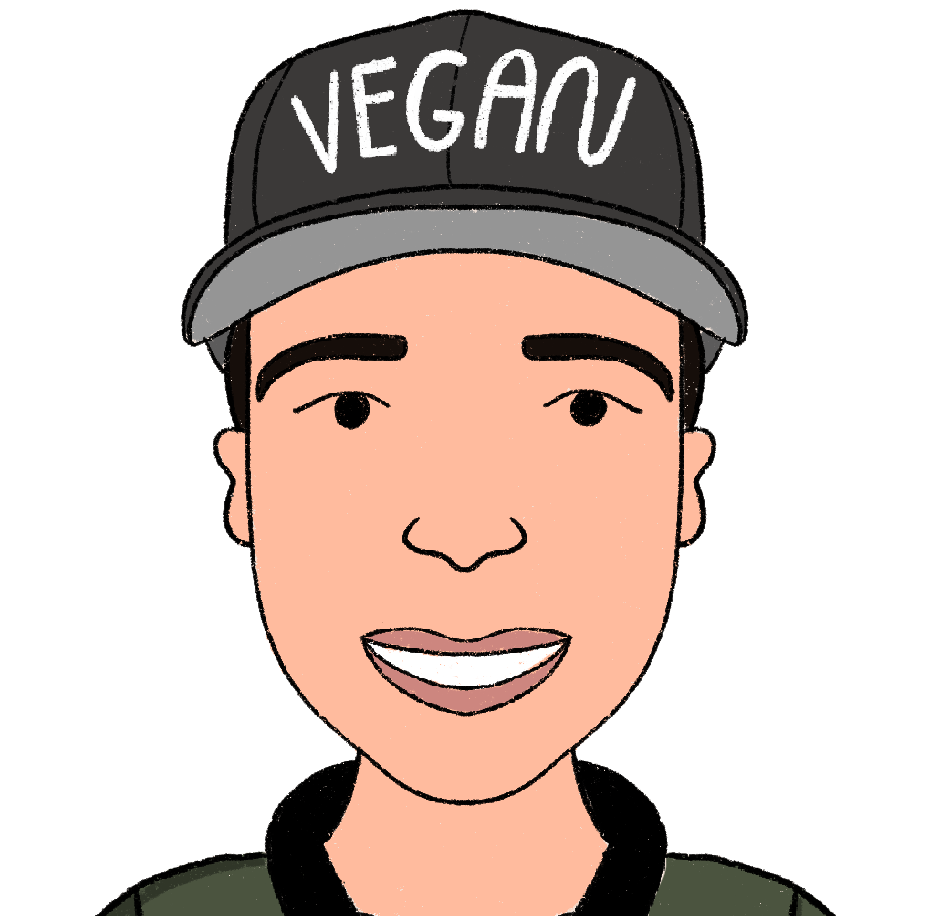 I have a lot on my mind. Sometimes, it's good to write it down so I can share my thoughts with other people without talking at their face for hours.

Melting in a Salad Bowl 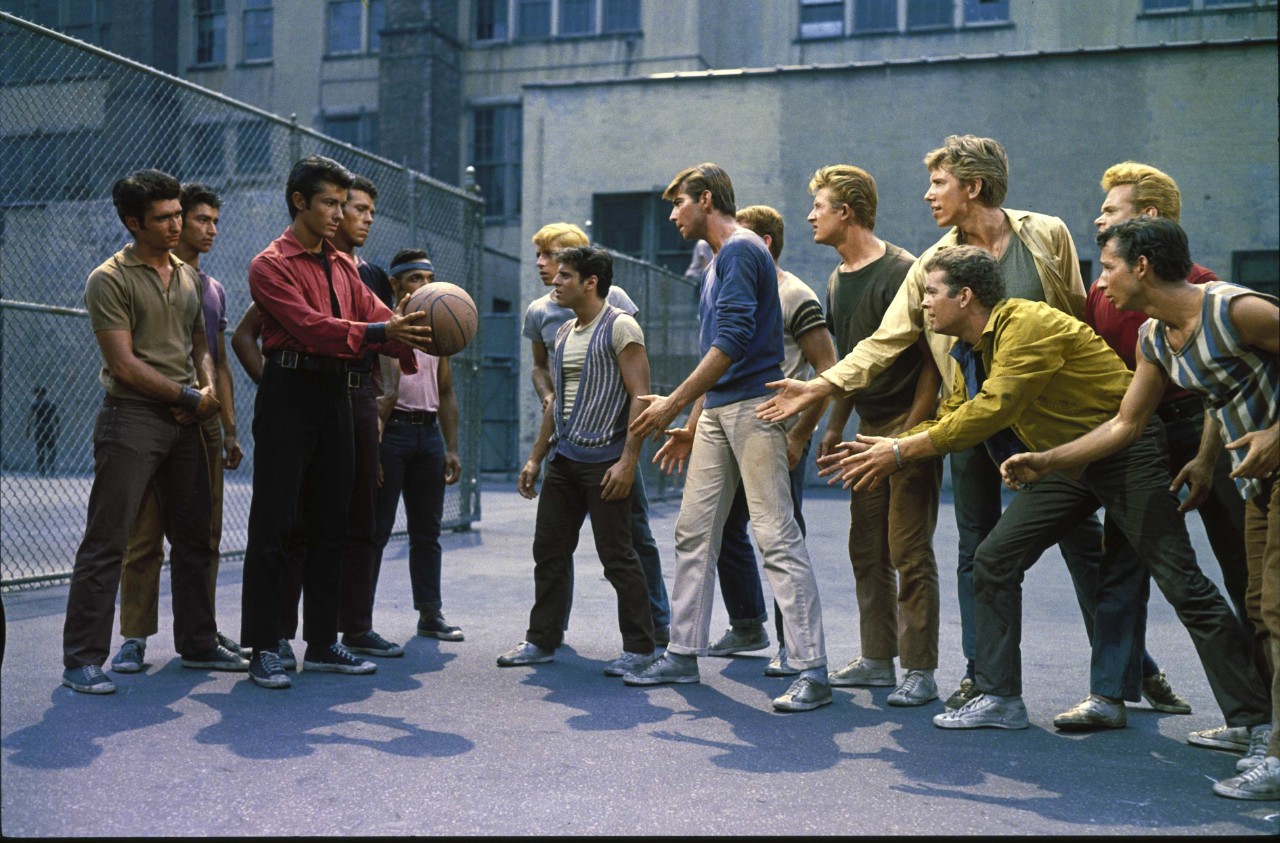 When I was born, my mother was torn crazy
They nearly gave me away to the wrong lady
Doctor said, “Sorry we didn’t see that comin’,
But there’s no way in the world that he came from a black woman”
I guess I been fightin’ since birth
I barely had life on this earth
Already subjected to people and how they judge
Little fair-skinned baby, resentment was in my blood

- Who I Am by Locksmith

Before I begin, I would like to throw out a quick disclaimer:

This post is all about my life and experiences. It comes from the perspective of a very privileged, upper middle class, white passing, cisgender, heterosexual male. I am in no way trying to speak for anyone else.

When I was a child, I fell in love with the film West Side Story. I don’t know how many times I’ve watched that movie, but I’m sure the number is in the dozens. I would sometimes watch it multiple times in a month, and I have the lyrics of almost each of the musical’s songs memorized, even to this day. I still consider it one of my favorite movies. For those unfamiliar with the story, the basic gist is that a Puerto Rican woman and a white American man fall in love, but are met with extreme resistance from their respective friends and family members, who happen to be members of rival gangs.

Despite my obsession with the film, I was always left torn with confusion and unanswered questions. I didn’t understand why the whites were unfriendly towards the Puerto Ricans, or why the Puerto Ricans didn’t want one of their own to date someone who seemed like a respectful, racially-tolerant man. Most importantly, especially for a younger me, I could never choose a side. I never figured out who the protagonists and antagonists were in the story. I always asked myself, If you were born during that time, would you be in the Jets or the Sharks? At age 24, I still don’t have an answer, and the older I get, the more distant I feel from both of the worlds I grew up in. 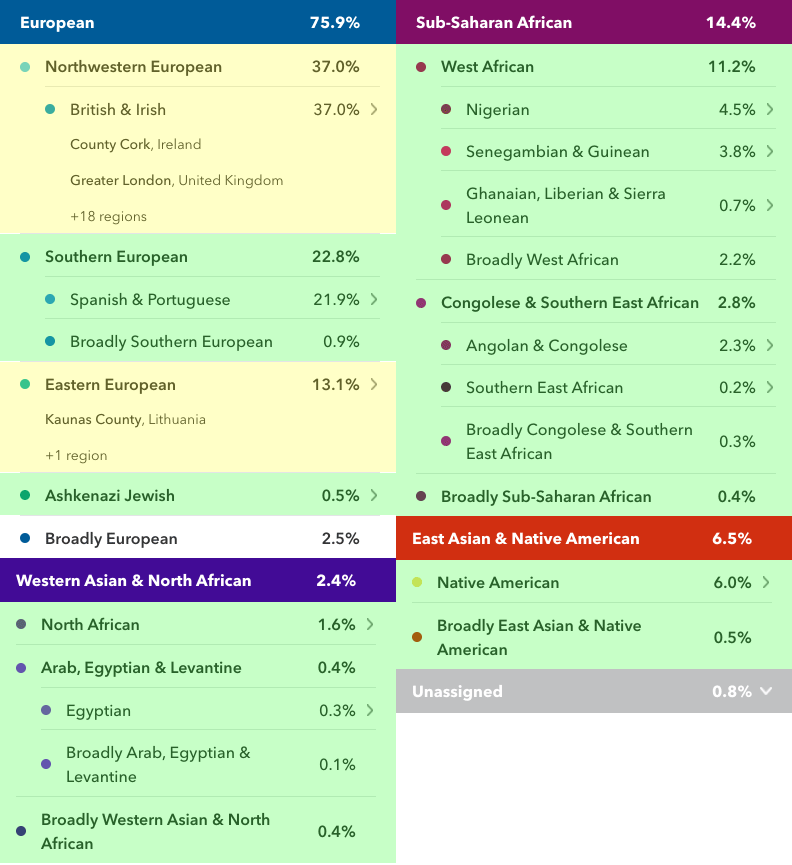 My 23andMe genetic breakdown. My father’s genes highlighted in yellow, and my mother’s in green.

Growing up, I liked the idea of being mixed. I loved playing the game where other people guessed my heritage, since most people could never get it right. During my early childhood, I spent most of my time in an area where the majority of the population was Latino, and the Cuban presence was strong. Due to my white skin and dark hair and eyes, people always guessed that I was Cuban. Wrong, of course. Nowadays, though, I sometimes really wish that I could be labeled as just “one ethnicity.” The same thing that provided occasional entertainment as a child is the same thing that has me continuously questioning my identity, making it difficult for me to know what culture I belong to.

In elementary school, I was absolutely labeled as white. My classmates knew I was Puerto Rican, but to them, it didn’t really matter; I was only technically Puerto Rican because my mom’s family is from Puerto Rico. Nobody cared that I had elekes from going through Santería rituals, that I loved when my grandmother cooked me arroz con gandules, or that we sometimes “fed” our Eleguá a piece of cake after celebrations. It wasn’t even significant that I was darker and had better tanning abilities than most of the Cubans, some of whom had blond hair and blue eyes. I was never taught Spanish, my last name is O’Neill, and I’m a vegetarian, so I was called, “gringo,” and, “white boy” like they were my nicknames. Not only was I white, but I was rich to my friends. Who cared that my mother was raised in a housing project in the South Bronx? I had my own room inside of a house with a backyard in Weehawken. I was a rich white boy who had a rich white father.

From left to right: my half-sister, my full sister, me, my grandmother, my three cousins, and my half-brother in the front. Which of these things is not like the others?

My first big departure from Hudson County, NJ was when I was fourteen. I was accepted into a somewhat prestigious high school in New York City, which my father was eager to send me to. It was run by the Jesuits, the same congregation that ran his high school in Detroit. Despite being in New York, this experience was my first into the world of true white people. The school had a mixture of students of course, but the high price tag definitely overpowered the city’s diversity, and many of my classmates were Irish and Italian kids from places like Bay Ridge, Brooklyn. I didn’t really make friends at this school. I was made fun of for a variety of things that were never issues growing up, but on top of that, I felt like I didn’t belong. The Irish kids would ask, “You’re not full Irish, right? You don’t look Irish, but your last name is O’Neill.” Sometimes, I would be approached in the hallway and asked, “You’re not full white, right? You’re mixed with something else?” These types of conversations were typically not initiated by me, or for any reason whatsoever. I transferred after my freshman year to a high school in Jersey City where diversity was higher than ever, so none of these things were a big issue. 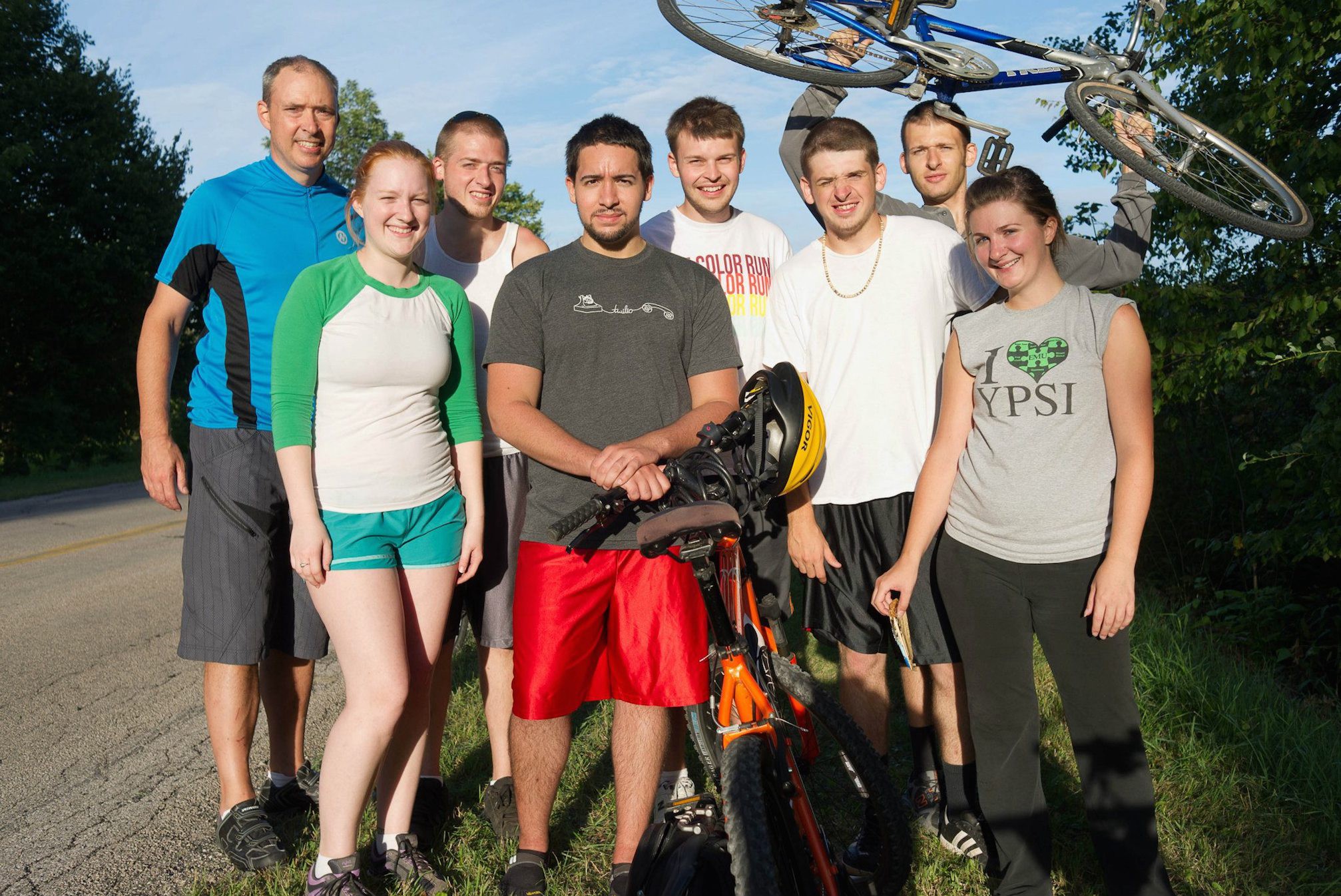 My cousins, their ladies, and yours truly. Which of these things is not like the others?

I spent the next four years at Rutgers University, a school where the administration prides itself for the diversity of the student body. This is where I learned that the word “diversity” meant something completely different to white people. It meant that there were way more whites and affluent Asians (mostly from South or East Asia, but definitely not Southeast Asia) than I was used to, with far fewer blacks and Latinos. It was at Rutgers that I learned nothing would ever be the same for me. The more I grew up, the more white I was becoming from a socioeconomic standpoint. My circle of friends was changing in its demographics, and there was nothing I could do to stop it.

I felt myself going through a transformation during this period, where my aversion to suburban white culture was bringing out the urban Puerto Rican in me more than anything else ever had. I made sure that everyone knew what I was and where I came from, so that nobody would ever think I was like the other white people on campus. Pepón Osorio describes something similar when speaking about how Puerto Ricans in New York differ from those in Puerto Rico:

In New York, Puerto Ricans forced their identity to be the number one priority in their life. People in the South Bronx became somehow obsessed with identity. Puerto Ricans, like any minority in the U.S., are often forced and pressured to become like everybody else. So as a response, you become super defined. I think this happens with a lot of new immigrants to the point of exaggeration, because you are determined to resist who they want you to become. In Puerto Rico, there’s no question about being Puerto Rican.

The dilemma continues to this day, and it’s no secret that the tech industry isn’t a diverse place; in fact, it’s even less diverse than Rutgers! I absolutely love my job, my career, and my coworkers, but I can’t deny that it gets a bit lonely from time to time. When a mixed person like me grows up around working class urban minorities, but ends up surrounded mostly by upper middle class suburban whites, it can be very difficult to relate to people in any meaningful way, simply because our experiences differ so much. I can’t swim, I saw a trampoline for the first time at age 23, and my definition of “dancing” is far different from what most white people do at parties. When I say things like, “I didn’t know anybody who listened to rock except for a small number of people in high school,” I am often met with disbelief or confusion. Many people make references to music, movies, and TV shows that I’ve never heard of, and then attack me for being ignorant about them, as if these things are in my control.

I have found some solace in social justice circles, however. I even like to think that I bring a unique perspective to the table in many discussions, since I’m somebody with family from two extremely different cultural and socioeconomic backgrounds. I have a Puerto Rican mother who grew up in what was arguably the most dangerous place in the country, and a white father whose family moved to the suburbs before their city took a shot at that title. I wonder, though, if these differences are what ultimately caused their divorce. Is it possible for people so different to stay joined in holy matrimony? And what of their children, who were raised with both cultures? For how long can we walk the tightrope without eventually falling to one side or the other?

Sometimes I question if I have already chosen a side without realizing it. Am I even good at speaking about social issues, or am I just a clueless, privileged white person trying to speak more loudly than the actual people of color? After all, I’ve never really been the subject of oppression in the same way that other people have. Or am I so obsessed with being accepted as a Puerto Rican that I blindly speak out against anything that can be considered racist, making me equally as dangerous? Can I even be considered a person of color if my color is white?

The thing about being mixed is that the answers to all of these questions about identity typically depend on who is asked. To some, I look/act/talk like I’m white, and to others, like I’m Latino. America’s one-drop rule defines me as non-white, but Puerto Rico’s says the opposite. In many ways, it feels like I’m so much of both that I’m not much of either.